Since our blog’s just as about art and desserts as it is about keybies, I figured I’ll share how I drew puppies. Elsa and Anna from Frozen puppies. This isn’t exactly a tutorial, either; it’s really just my process. Maybe in the future Kay and I will share how we draw and color our work. Maybe help a few budding artists out there. We’re still improving of course, but isn’t that true of every artist? We just hope you enjoy the ride along with us.

They were a great doodle subject, and, well, I’ve never been able to draw decent animals before (that’s not true; I can actually draw some pretty nice dragons, but that’s a long time ago). Like the very first keybies themselves, these started with a doodle. This doodle. 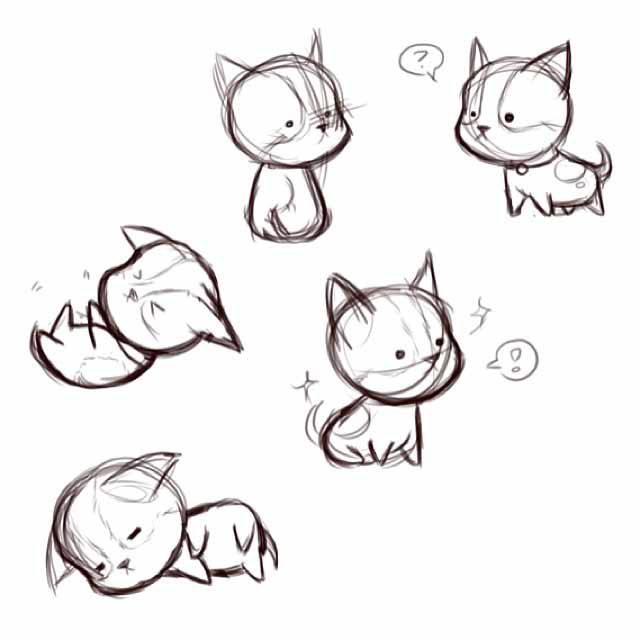 After drawing a set of Phoebes, I tried adding a braid on a roughly sketched puppy, because I just happened to think: can I pull off an Elsa puppy? After I’d doodled an Elsa puppy, I had to draw an Anna puppy. It just felt right. With a low-opacity brush on SAI, I ‘let it go’. Literally. I was listening to the song as I drew this. It’s catchy. I was pretty proud of Puppy!Elsa and Puppy!Anna, but the sketches were in bad need of a clean up though, so using the Pen tool (also on SAI), I redrew everything for a nice, clean finish.

After alternating between Photoshop and SAI for flats, shading (Photoshop) lettering and fine line details (SAI), we get two nicely shaded pups! I was originally going to make Elsa a blue puppy, but reason got the better of me. I also added Anna’s gloves and boots to her original lines because the extra detail made for a nice break in all her brown. I’m not the best letterer around–I was proud enough that my handwriting was legible. And that’s it! If you’ve got any questions about drawing, or about the Frozen puppies, ask away~!

Art in Island: Step Into a 3D Art World!

It Pays to Look Back

Racketeras Unite! A HUGE Thank You To Cosmopolitan PH!!
Home | Blog | I WANT A KEYBIE! | Keybie FAQs | About Us
© 2013 The Keybie Cafe | Designed by Mara Mina