.
The Keybie Cafe’s been around for a really long time. Really long. Even I forget just how long we’ve been serving dotty-eyed cuteness, but on days when all I can remember is how tiring or time-consuming doing that can be, it pays to look back.

It was much harder back then. If you’ve clicked that little About Us page above and skimmed through, you’d know that the Cafe started because I wanted trinkets of my favorite characters. The only thing I had to make those ‘trinkets’ was the trending craft at a time when ‘trending’ wasn’t really a word: paper clay. Dante, Vincent Valentine, and Riku were my biggest crushes.

These were the very first keybies. Seriously. I drew the outlines on cardboard, then filled them in with paper clay I colored with pentel pen ink. My pentel pens stopped working properly after that. These charms were then coated in white glue as a finish, and stuck on the only base I could think of: salt dough that I covered in more glue (that I colored black).

Yes, the first keybies were made of bread–and I was proud of ’em!

There were several things I had to fix of course. First, these were too big to keep on my bag. Second, they were made of frikkin’ bread. So I tried to design something smaller–but because I didn’t want torture myself sticking paper clay into teeny, detailed spaces, I redrew the same three characters into something cleaner, simpler, and dottier. 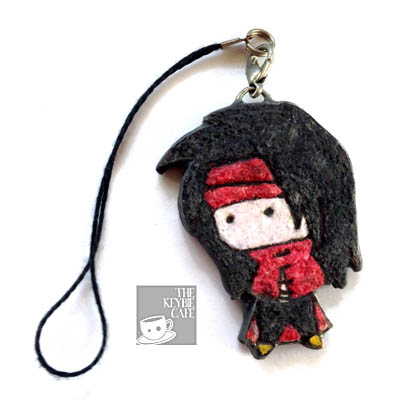 That was how it started. Bread and paper clay. While I improved my process, other friends thought they looked cute, and got me making a few more paper clay charms of their own favorite characters (like a Charizard, a Pocoyo and Pato). At the time, I had no idea where to buy cellphone straps, so I made my own. I had no idea what to use for protective coating, so I kept using glue. Internet help? Hah. I was on dial-up. No way man.

Thanks to a friend venturing into different businesses at the time though, I decided to muster up whatever Photoshop skills I had to digitally color those three outlines I started with, and make a few more. The plan was to print several pieces of my designs, and sell them at what would’ve been my first bazaar. It didn’t pull through, but I made the charms anyway. I called them keybies, and they were in time for Christmas.

Since Multiply used to be the popular platform for online shops, I went and made the Keybie Cafe. The idea then–which is the same until now–was to serve cuteness. Why didn’t I choose keybiecafe.multiply.com? I didn’t know better. :I
.

I was very active in deviantArt at the time, so I posted pictures of the first keybies there. While admiring a talented, fellow pinoy’s digital art–I got the opportunity to have my very first feature through them in Meg Magazine, all the way back in 2008. A multiply site, hand-drawn and scanned website graphics, ziploc baggies, and P20 per keybie–
of which there were less than 20 designs available.

Sometimes I look back and think, wow. This was a really long time ago.

Then it hits me how far we’ve come since this first milestone—which had me giddier than you can imagine—and I’m grateful all over again. :)

Why did I write this?

Looking back is good and all, but I had an ulterior motive. See, I wrote this because, like most people, I get disheartened. Following your passion is never easy. Sometimes you’re alone, sometimes you get tired. Sometimes there would be several things against you, and sometimes, when nothing feels like it’s going right, giving up is going to feel like the right thing to do. Who doesn’t feel like this once in a while?

If you don’t–please get in touch with me ASAP and let me osmose your vitality. Just a bit.

Kidding aside, I’ll say it again–no matter how tiring things can get, it pays to look back. Back when all I had for motivation was the desire to make something I can be proud of, something I can show off, something that keeps my favorite characters close to me. Something cute.

When I remember the magic of being able to actually do all this–and remember how, for over more than half a decade, my little keybies give the same little bit of magic to fans with the same desire I had all those years ago–I’m also reminded that all the effort is worth it.

It’s worth it when you guys tell me you’ve been buying keybies for years, and let us be part of your childhood as we watched you grow up every year you visited our booths. It’s worth it knowing it’s led me to meet amazing people and foster equally amazing friendships.

It’s worth it knowing that my childish fangirling, cheapskate crafting, and obsessive late nights (for which my very supportive parents scold me endlessly for) have created something something like the Keybie Cafe, which I can proudly call my own.

Though I have family and friends who helped me take it to where it is now, there’s no denying this one fact: I couldn’t have kept it running this long without you guys. :)

So, from one grateful, newly motivated Ms, Manager, thank you.

Here’s to more keybies for the rest of the decade!

How to Clean Rubber Keychains in the Easiest Way