We’ve been sharing uber cute sea creatures that’ve been all over the internet lately, and since we love cute things at the Keybie Cafe, we’re putting together the 3 sea cuties that have taken the net by storm in one masterpost!

Let us know which one you like best in the comments! 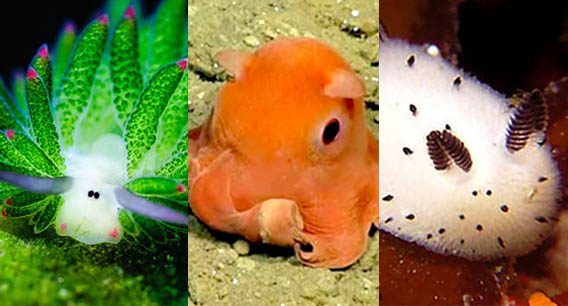 Deep, deep under the ocean’s cold, dark waters, there lives a species of wide-eyed octopus that’ll win you over with a little wiggle.

These peculiar creatures don’t officially have a name yet, but now, scientists are preparing to formally name the species. They’re considering the name that captures this tiny cephalopod’s essence: Opisthoteuthis adorabilis.

Sea slugs don’t really make you think of ‘cute’ when someone brings them up, but Japan’s Twittersphere begs to disagree. It’s has just rediscovered what is probably the cutest sea slug ever: Jorunna parva, the sea slug that looks like a fluffy bunny.

This little sea slug’s bunny ears are actually rhinophores, or scent/taste organs that help them detect chemicals in the water and make their way across the ocean floor. They can be found from the Indian Ocean, Japan, and even the Philippines!

Baa? Moo? Which ever you think this sea slug should say, one thing’s for sure–it’s darn cute.

The Costasiella kuroshimae (or ‘Leaf Sheep’), is called that because this adorable little sea slug, whose beady eyes and cute feelers make it look like a cartoon sheep, feeds on algae.

What’s fascinating about the tiny ‘leaf sheep,’ which can grow up to 5mm in length and can be found near Japan, Indonesia and the Philippines, is that they are one of the only animals in the world that can perform photosynthesis. They suck out the chloroplasts in algae they eat and incorporate them into their own bodies in a cool process called kleptoplasty.

This basically makes them solar-powered slugs!

Calico Cat Cafe: Play and Dine With The Cutest Cats in Shinjuku, Tokyo!

5 of the Cutest and Most Creative Necklace Designs

Kawaii and Quirky Kitty Items To Celebrate Cat Day!
Home | Blog | I WANT A KEYBIE! | Keybie FAQs | About Us
© 2013 The Keybie Cafe | Designed by Mara Mina