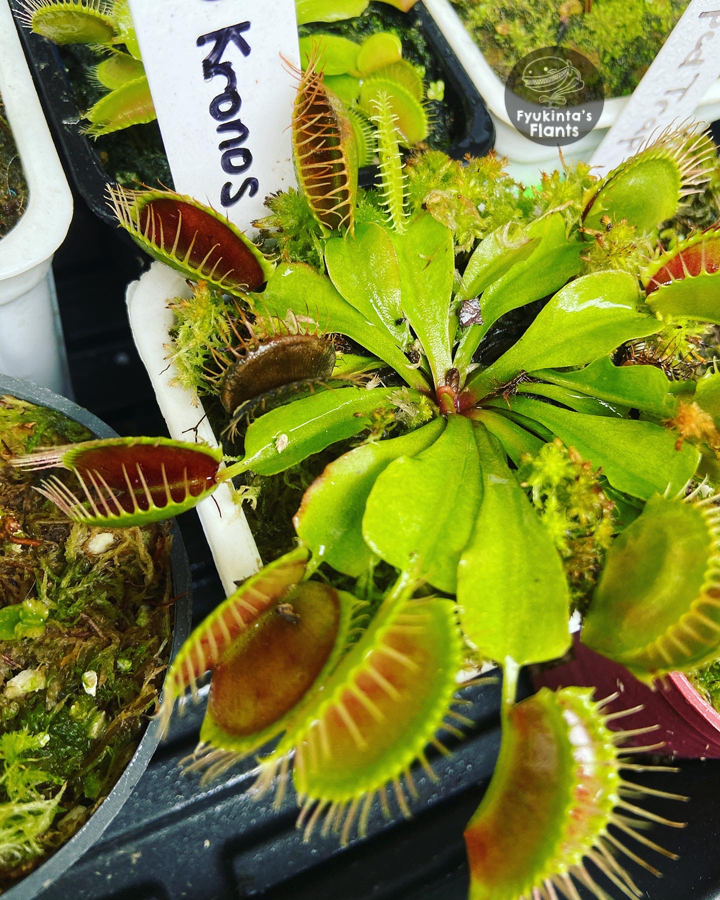 There is only one Venus flytrap, but there are many Venus flytrap cultivars, or cultivated varieties. Each cultivar can have unique or weird properties that make them prized by collectors. Some have wild mutations, like D.M. Hanicka’s Butterfly, D.M. Mirror, or D.M. Asmodeus (check out my FB or IG for daily pics of flytraps.) 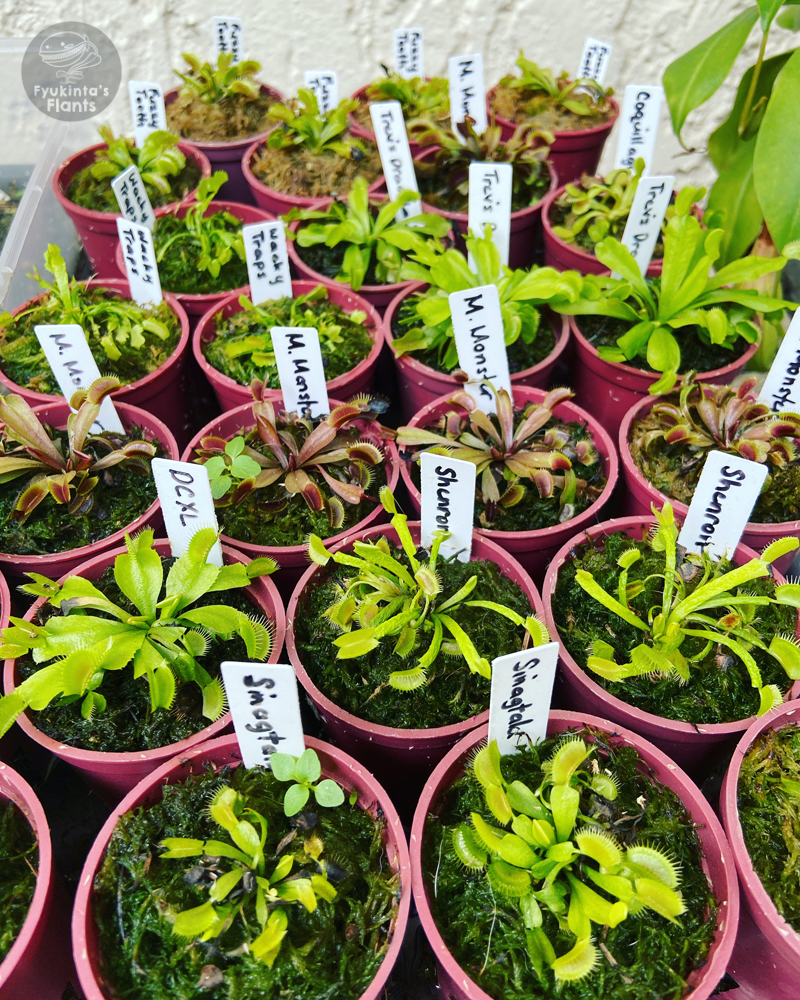 Venus flytraps can be propagated through different methods:
🌿 Seeds
🌿 Tissue culture
🌿 Taking pullings or divisions from a mature plant

The difference between them is that seed-grown flytraps are always considered “Typical”, or D.M. Typical.

Venus flytraps that have names are clones propagated through pullings, divisions or tissue cultures from the original cultivar, which is why they retain the features of that cultivar.

To illustrate: If D.M. Asmodeus above were to flower and produce seeds, plants grown from its seeds would be Typical.

Typical flytraps are genetically different from their parents, which means they won’t necessarily have the traits of their parents. 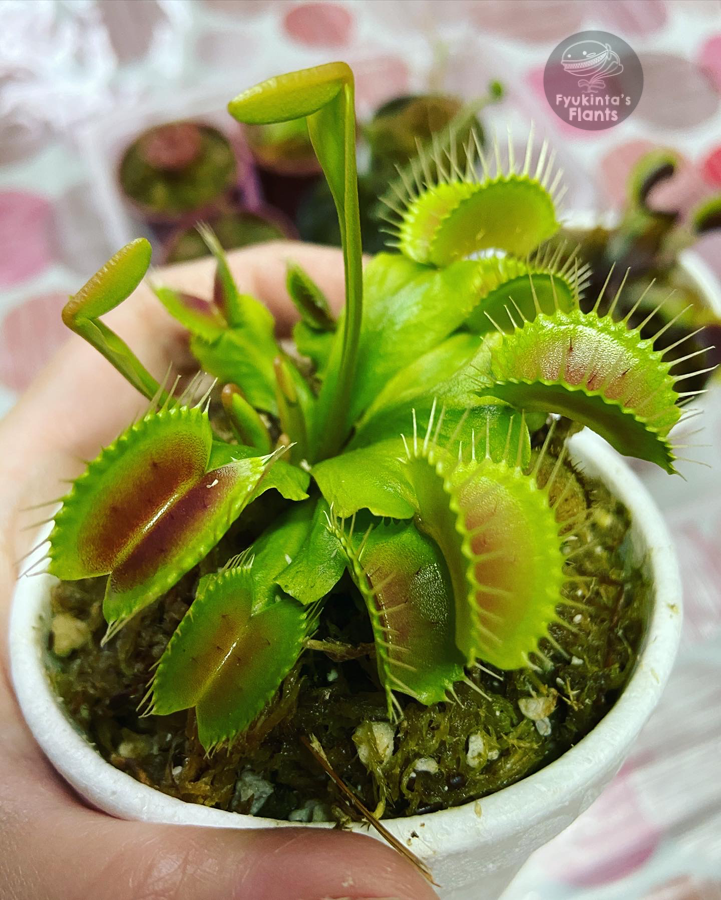 This is why you cannot take the seeds of any cultivar and expect them to look the same as that cultivar. If you bought a flytrap that doesn’t have a name, it’s a D.M. Typical.

Named cultivars start off as Typicals, but some growers breed Typicals to enhance a trait or find a mutation. Cultivars are the result of these mutations.

I unfortunately do not have experience growing Venus flytraps from seeds, so I can’t offer advice here. However, if you want to try growing flytrap seeds, make sure you buy from a trusted source. There are many, many fake seeds, so be careful!

Venus flytrap cultivars with special traits—like large traps (D.M. B52 or D.M. DX CL) or unique traps (D.M. Wacky Traps, D.M. Korean Melody Shark)—are all clones of the very first plant that exhibited the characteristics these cultivars are known for.

One particularly cool cultivar is D.M. MK 1979, named because its creator, Mike King, grew this plant in the actual year of 1979 and is still growing this clone to this day!

As another example, SD Kronos is bred by Stephen Doonan, Trev’s Dracula is bred by Trev Cox, and the GJ cultivars like GJ Maratchi, GJ Bloody Nurse, and GJ Rose are all bred by Green Jaws, a nursery in Germany owned by Matze. These cultivars are quite rare and are more expensive than others.

Some cultivars are registered with the International Carnivorous Plant Society and are internationally recognized. However, we have some cultivars are only found in the Philippines, like beginner-friendly D.M. Sinagtala and D.M. Shenron with its dragon scale-like leaves, which are both created by Rain Tolentino of Venus Flytrap Store Philippines.

There are more local cultivars like D.M. Princess of Negros, D.M. Ogre, and D.M. Rosabella, named by local growers who bred and cloned these plants to preserve their special properties.

All named cultivars in that sense are clones from the very first plant that exhibited their special features and are preserved through cloning.

🪴 How many kinds of Venus flytraps are there?
There is only one kind or species of Venus flytrap: Dionaea muscipula. However, there are many, many cultivars, both registered and unregistered. Flytrapcare.com has a list of some registered Venus flytrap cultivars with descriptions. Note that this isn’t an exhaustive list though, as some growers like Green Jaws, BCP and Carnivoria have cultivars that aren’t here—like D.M. GJ Green Zebra, or D.M. CV Rimmon.

I won’t give you a list of all the cultivars there are (that’s impossible), but I do post plants I have for sale on my FB or IG, with some regular plants on my Cococart and Shopee. Sometimes I have big sales where I sell large Venus flytraps and rare cultivars. I also offer wholesale prices for resellers, just ask.

🪴 Are cultivars different from each other in terms of growth?
Yes, some cultivars are harder to grow than others, like D.M. Umgekrempelt or D.M. Waveclip. It’s best to ask your seller/grower about a cultivar if you want to be sure.

But as long as you know the basic requirements of carnivorous plants in general, you can raise a Venus flytrap. if you read both parts of this guide from top to bottom, your chances of success are much higher 😉

What’s important is to keep observing, learning, and don’t give up! I’ve killed many flytraps and other carnivorous plants before, I just kept trying and determining whether my growspace can handle certain plants or not.

🪴 How can I propagate my Venus flytrap?
The easiest way is by taking pullings. I don’t have a guide for how, but there are plenty online. You can try reading this guide from the International Carnivorous Plants Society to learn how to actually take good pullings.

D.M. Typicals with some All Greens
ㅤ

Instead of planting them in peat/sand, you can use sphagnum moss. I try to use live sphagnum moss, but rehydrated dry sphagnum moss is ok too. I’ve even had success making B52 pullings grow in washed coco peat. Make sure that the media is moist/wet.

Some growers stick leaf pullings in pots and treat them like the mother plant. Then they forget about them. Depending on the cultivar, leaf pullings can take months to produce a good young plant, but it will take more months before they grow to much larger sizes. 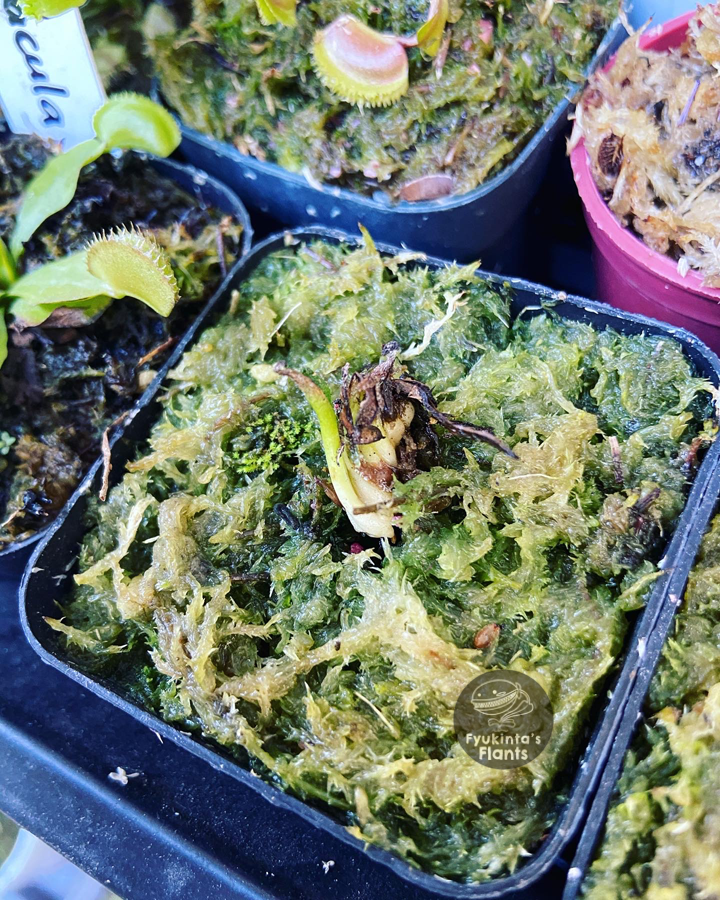 This is a hefty topic for an already hefty blog, but long story short, Venus flytraps are a temperament plant.

They expect to experience winter and spring—and which also means it’s not native to the very tropical country that is the Philippines.

They need dormancy to be able to live for a long time. Without dormancy, they last maybe 2-3 years, though I don’t know exactly how long.

This is unfortunately true of most of the plants that are grown in the Philippines. 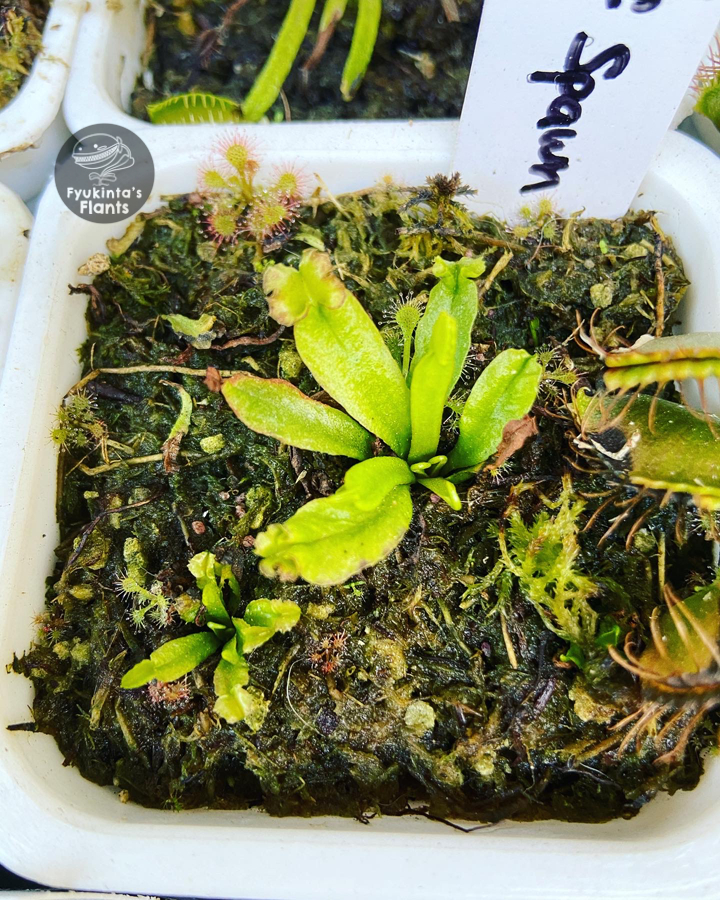 Because we don’t have winter, our plants can’t go through the necessary dormancy naturally. This makes things a little weird.

That’s because sometimes a Venus flytrap “goes dormant” still (like the D.M. Coquillage above), which can be seen by no new growth for weeks. During this time, your flytrap will look ugly, but the rhizome will be intact.

When this happens, you can try repotting your flytrap in fresh media (I use sphagnum moss) to try to “wake” them up, like what I did with my D.M. Werewolf Spawn.

🪴 Do you put your plants through dormancy?

Some people try fridge dormancy, but I don’t. I have no space in my fridge. I’m also worried about killing my plants if I do it wrong. Instead, I try to propagate through leaf pullings to make sure I always have a clone of my Venus flytraps even if the mother plant reaches the end of its lifespan.

Even if carnivorous plants eat bugs, there are some pests even they can’t handle. This doesn’t mean that your garden is bad; pests can happen in even the the healthiest gardens. One such pest is spidermites. These annoying pests make reddish brown splotches on Venus flytraps. 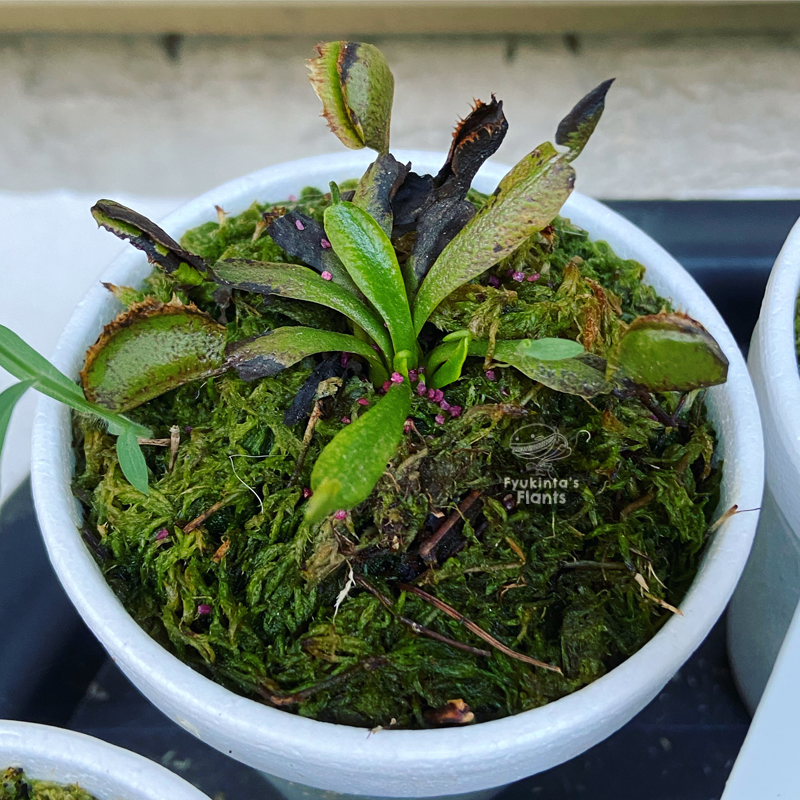 You can treat pests with  systemic pesticides, like Starkle G. I use it myself by sprinkling some inside the hole I make in the planting media before I stick the plant in. Starkle G doesn’t dissolve in water and is used just by sprinkling. It’s supposed to offer protection to your plants for 30 days or until the pink color fades.

There are also ready to use pesticides that can be sprayed directly on plants to help protect against pests as a preventative measure.

Mealybugs are another really annoying kind of pest, because they can attack the roots of your plants. I usually check for them when I notice a plant isn’t growing new leaves or has too many dead leaves. They appear as fuzzy white fluff in the roots, and have to be washed off. My usual treatment for this includes sprinkling Starkle G into the media to kill these fuzzy annoyances.

If you don’t want to use pesticides, you can also do a 24 hour bare-root soak. This means you uproot the infected plant, and soak them in low ppm water for a full 24 hours. I don’t like doing this though as you need to acclimate the plant all over again, helping it readjust after having its environment drastically changed. 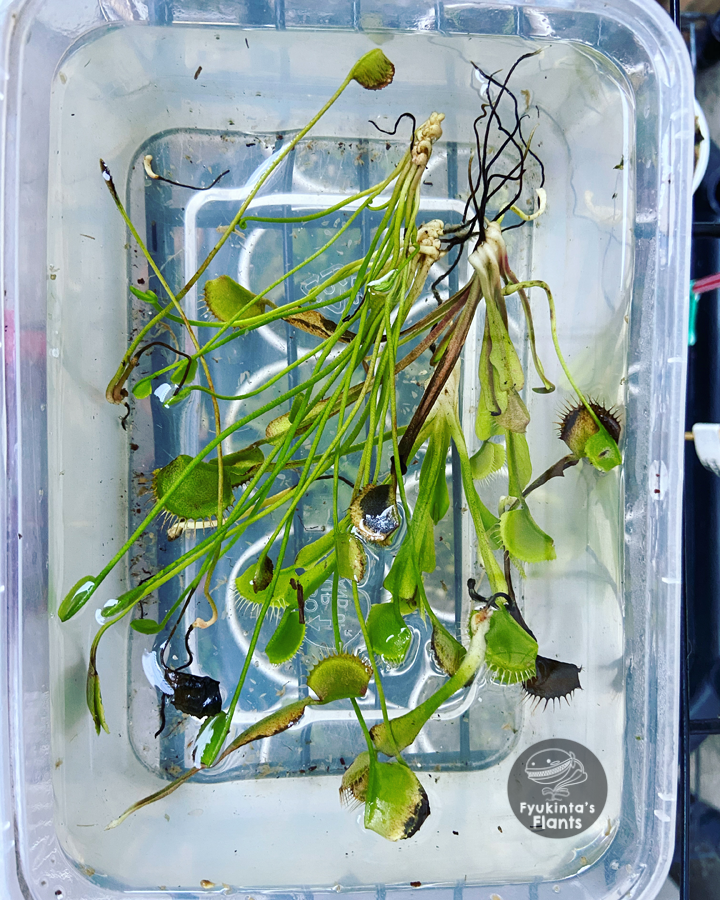 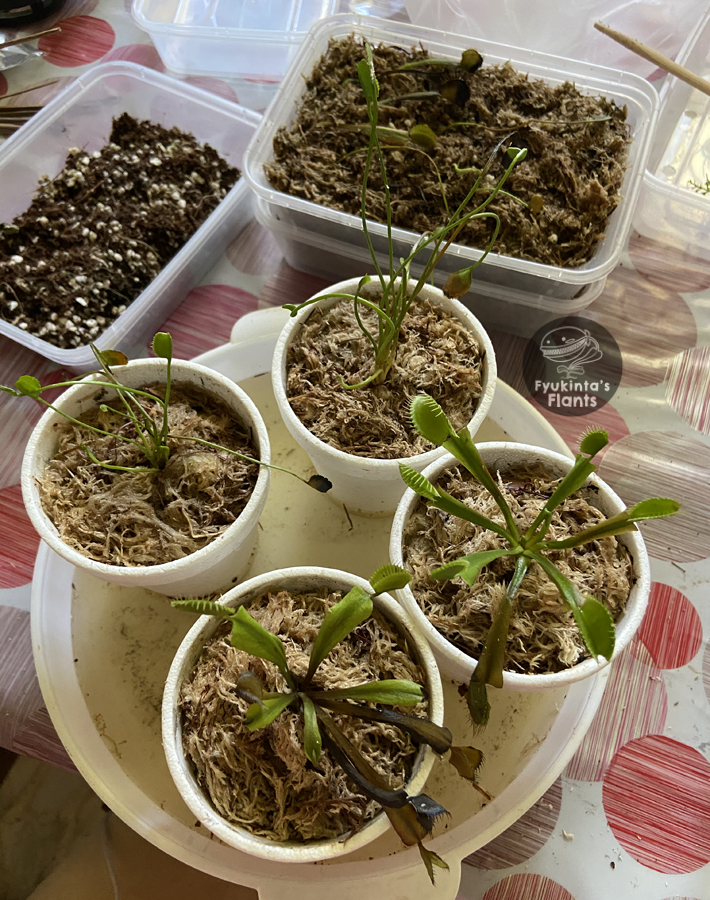 Soaking assorted flytraps overnight to get rid of spidermites
ㅤ

How to take care of a Venus flytrap

I had to split this guide because it’s already very long, but if you want to learn how to take care of a Venus flytrap, check the second part of my guide below! 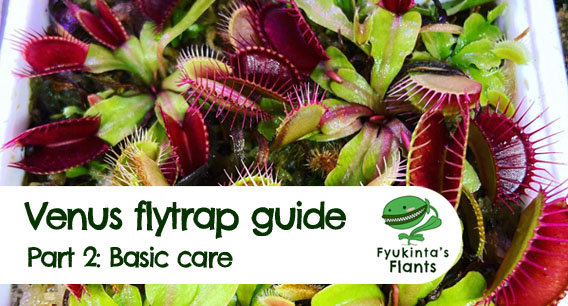 If you have any questions, feel free to ask in a comment—but please make sure it’s a question not already answered in any of my guides!

I also have a grow guide for byblis, and another byblis guide answering questions from my customers. You can check here for all my guides, including how to use Maxsea.

Choosing the right soil or planting media for carnivorous plants
Home | Blog | I WANT A KEYBIE! | Keybie FAQs | About Us
© 2013 The Keybie Cafe | Designed by Mara Mina