Like most carnivorous plants (and plants in general), Byblis plants need sunlight. Direct sunlight is great, but for Philippine summer heat, it’s best to gauge it. I’ve had success keeping them in full sunlight, but I keep their media wet.

Most growers eliminate this problem by raising their plants with an indoor setup; they use regular electric lights positioned close to the plants to give them their sunny needs. These actually result in beautifully red Venus flytraps and sundews, but personally, I’m not there yet. Byblis will grow longer leaves and more flowers given enough sunlight, but they don’t change color like other carnivorous plants usually do.

If you’re going to keep your Byblis in full sun, make sure they’re standing in a tray or cup of water. The Philippine heat gets merciless and your rainbow plant may wither due to dehydration. This is actually the reason I keep their potting media wet; it’s safer for them to stay moist while they’re out in the sun. Otherwise, more mature plants will be fine without water for a day or two, or when the weather isn’t as sunny or in bright shade. 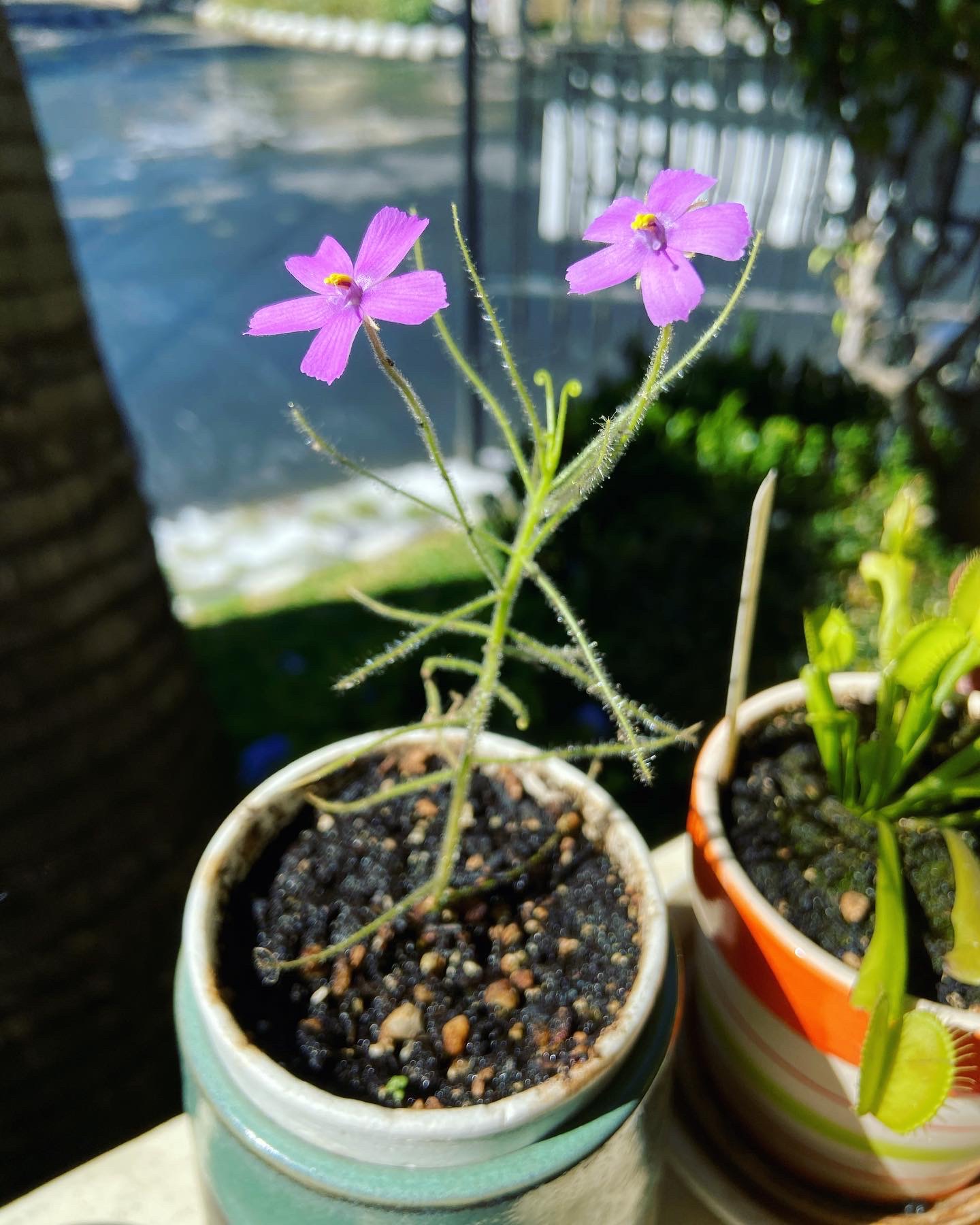 Make sure to change the water in trays to avoid mosquito larvae, since some smarter or luckier mosquitoes just won’t choose to land on the Byblis before laying eggs. If you keep the pots in cups though, like I do, you won’t have this problem. I’d still recommend changing the water once in a while to “flush” the potting media though.

Unlike other carnivorous plants, I discovered that Byblis guehoi can live for a time on regular tap water. However, this is only for emergencies. I would recommend using rain, distilled, or reverse-osmosis water (RO water, which drips from your airconditioner or pools from the condensation of a cold drink) from the top to “flush” out potential mineral build-up. It’s best to do this as often as possible when you have this kind of water available.

Use the right potting media

For potting media, I use thoroughly rinsed cocopeat mixed with perlite. Some growers use sphagnum moss. Both share the property of being mineral-free while lacking any nutrients; these burn the roots of carnivorous plants, which adapted to nutrient-less soil by consuming insects.

One plant can be cut as it grows longer to produce more. Byblis grow into long stems that eventually need support through sticks or frames because they’re unable to support their own weight. I prefer to avoid this and trim off the top when they start falling over. Once they do fall over, they start growing in an upright direction.

There are two ways to make cuttings: by rooting them in rain/distilled water first, or by planting them directly in carnivorous plant media. For the second method, make sure to thoroughly soak the media and poke a hole into it first; don’t just stick the stem into it or you may risk stressing the plant and cause it to die before it roots. Keep cuttings wet after planting to encourage rooting. If your cuttings have flowers, they’ll still bloom too. The more they eat, the faster they also grow. 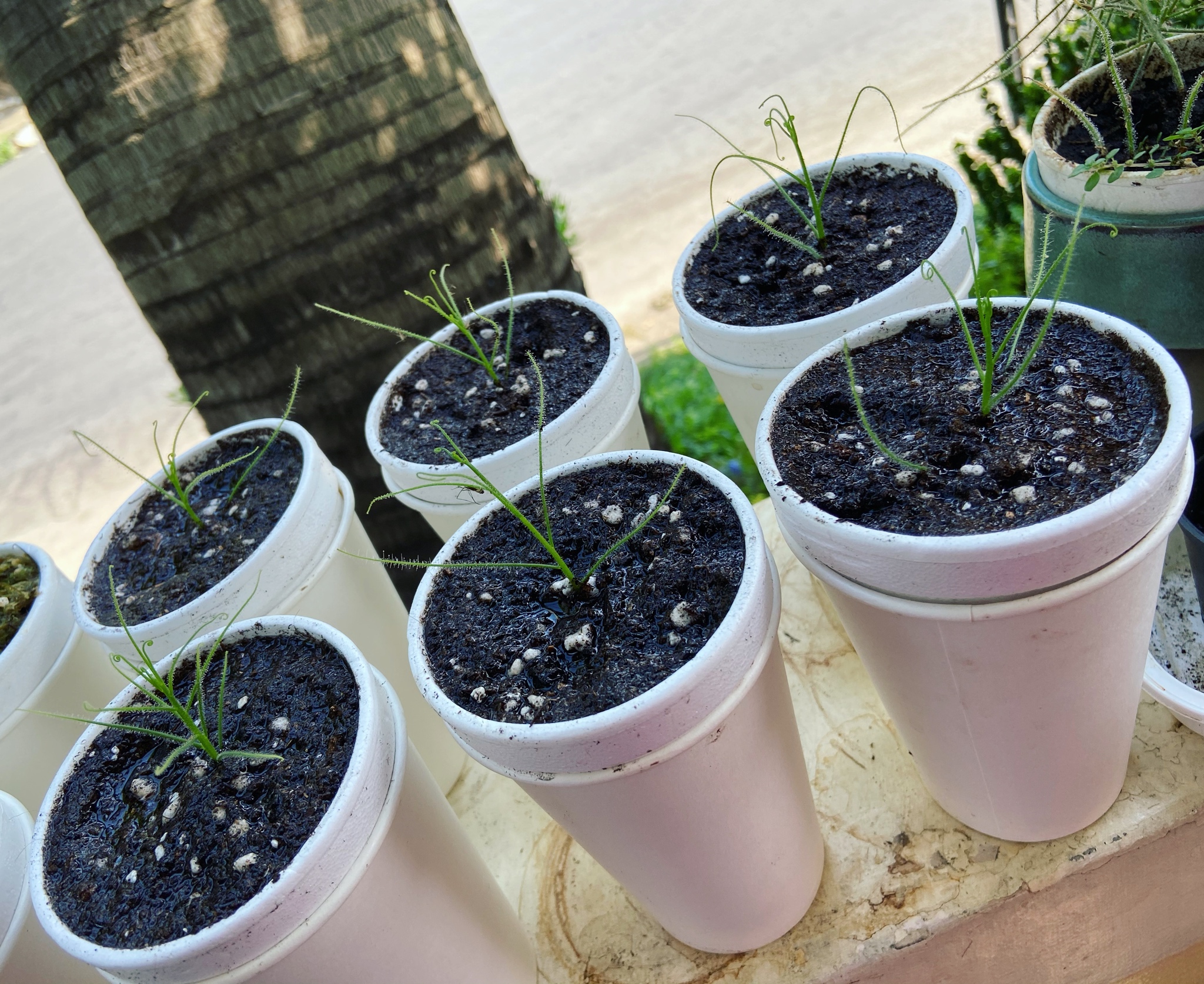 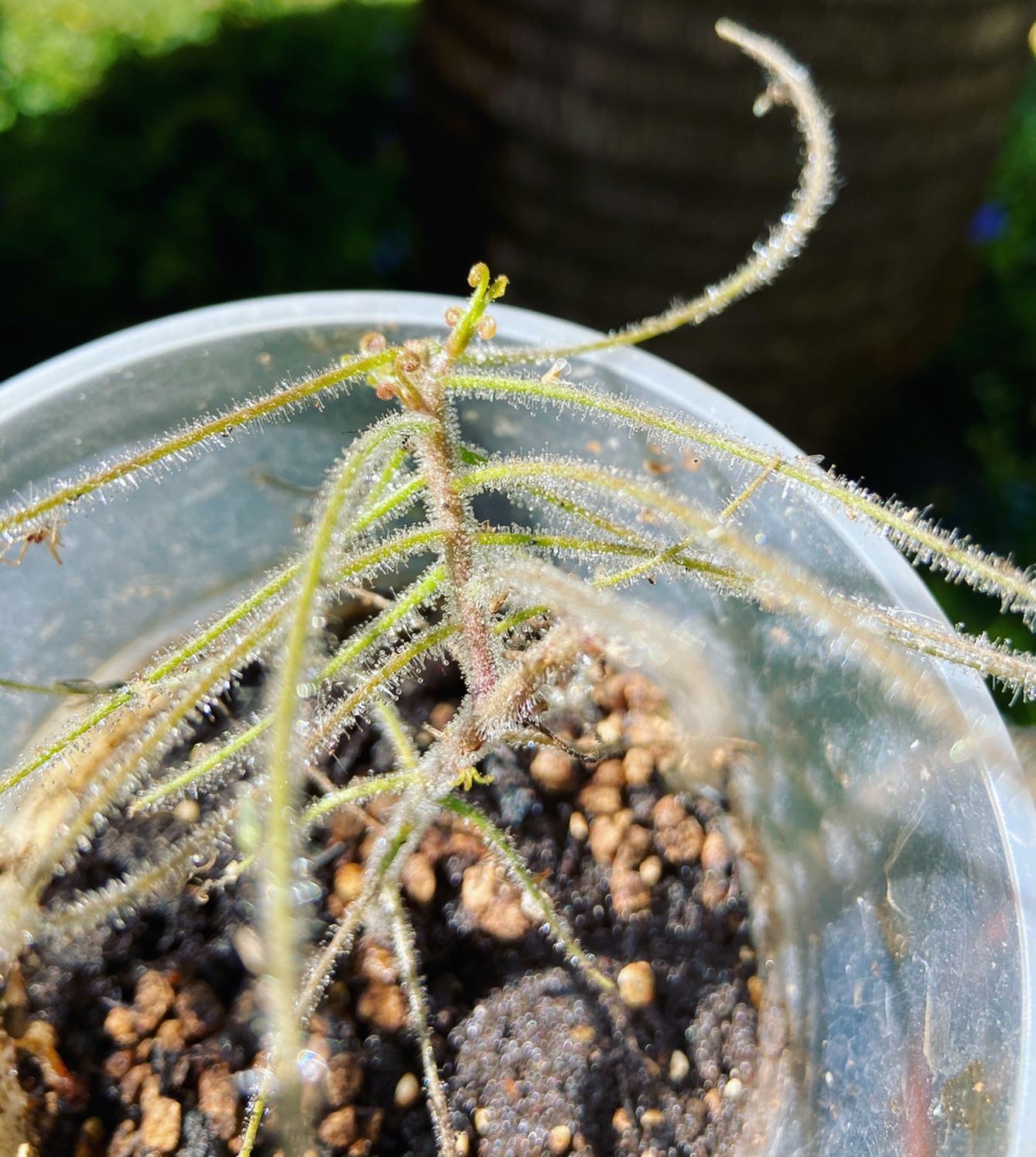 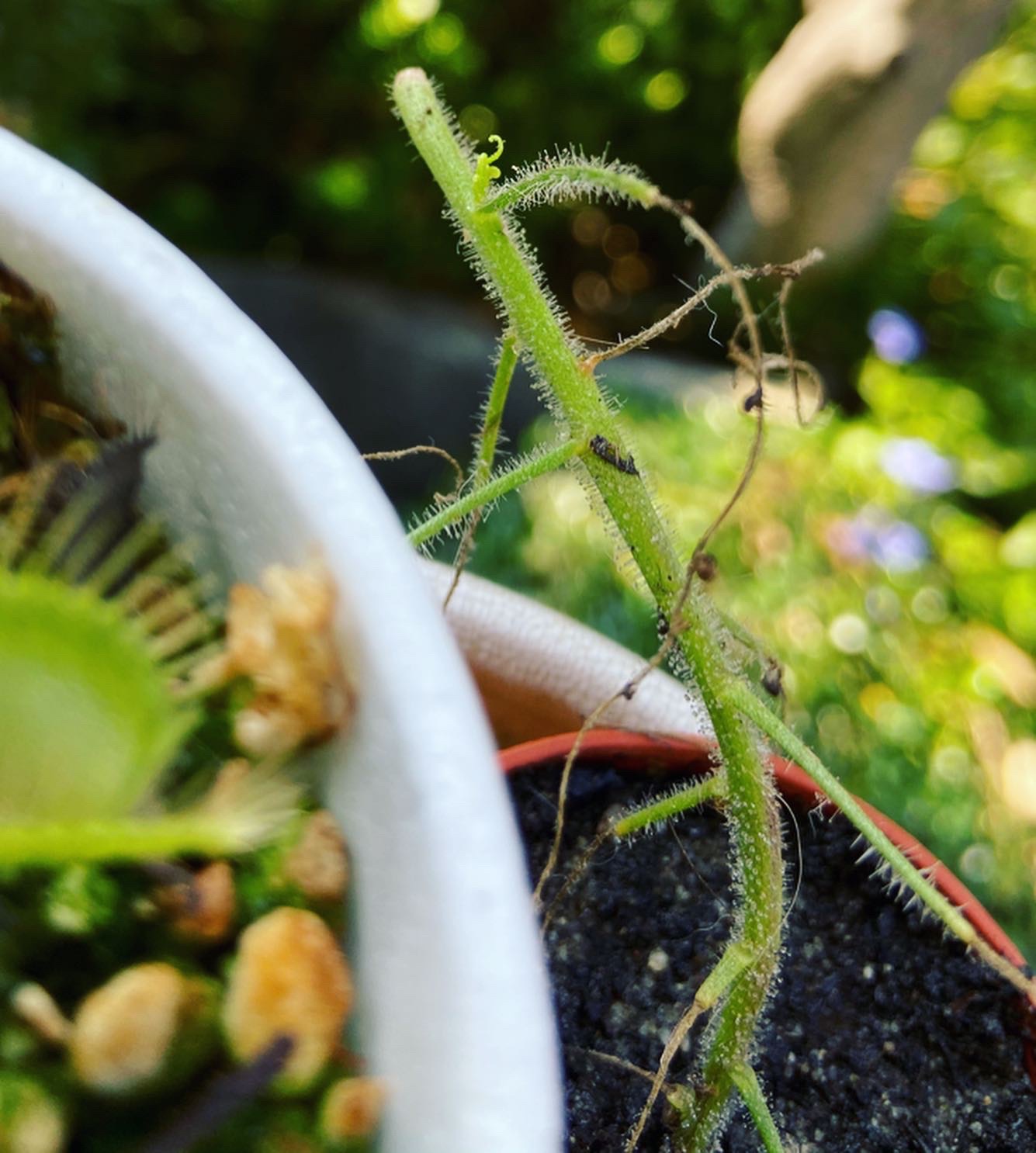 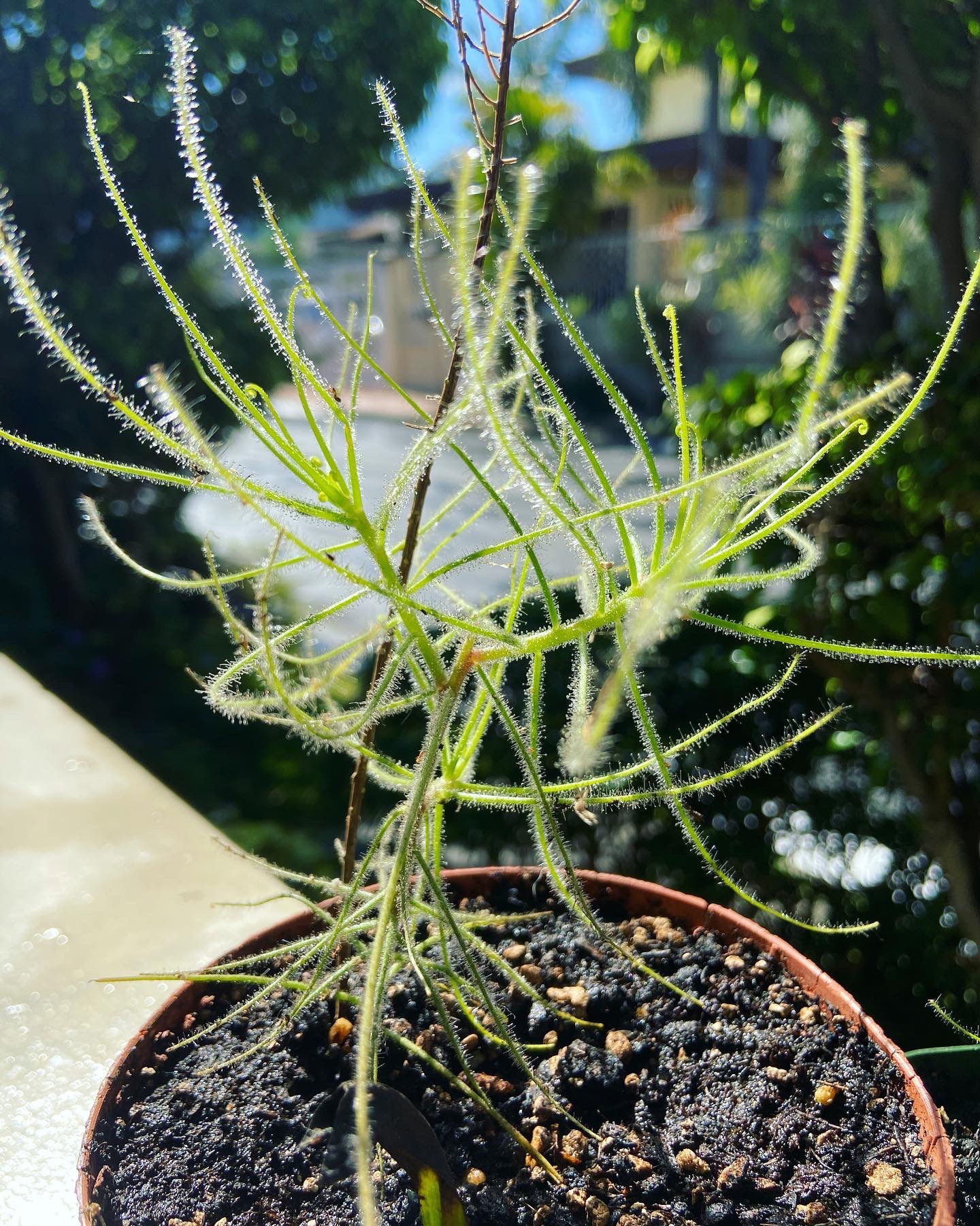 I’ve raised venus flytraps, sundews, pitcher plants and butterworts—but I find that Byblis guehoi is incredibly easy to raise in comparison. It also offers great pest control (but not completely, since between you and a plant, a mosquito will choose you), based on the many mosquitoes that are sometimes still wiggling on its mucus when I check in the morning.

If you want even more detailed information about byblis, check out my second byblis blog for more facts that I couldn’t cram into this one!